Get your shark lads here!

Check out these swashbuckling shark lads from the NGO known only as Beneath The Waves!

Want a sweet mission statement on what exactly Beneath The Waves is about? Of course you do!

Beneath the Waves is dedicated to advancing the conservation of sharks and the habitats they occupy through cutting edge scientific research (from About Beneath The Waves).

Recently, I, the ORIGINAL Mr. Homeboy, got to see the research of Beneath The Waves in person and I am here to tell you what that research looks like.

Tools Of The Shark Research Trade

Check out the up-close-and-personal tools of the handsy shark research trade!

Sooner or later one of the baited hooks hits the shark jackpot. Every shark regardless of size gets reeled in by hand.

In this instance the payout was a 12 foot male tiger shark!

The crew reels the shark in and lines it along side the boat.

Measurements are taken and blood samples are drawn.

All sharks get a tag. However, high value targets like tiger sharks get special tracking tags. The idea is to find out where the sharks are spending most of their time.

With all of the data collected it is time to release the shark so that it can go back to murdering sea life!

With the field work done the real research begins.

Tracking tags pop off of sharks. The data is loaded onto computers and maps are made of where the sharks spend their time. Turns out that tiger sharks often go to very deep water (1,300 feet). The hypothesis is that they are mating down there. I mean, how isn’t down for some deep sea loving?

The blood samples are analyzed to determine the shark’s health and genetic makeup. Yup, Ancestry.com ain’t got nothing on shark family trees.

Application Of The Research

The research obviously has academic value. The crew from Beneath The Waves are all scientists and publish their data.

The data is also used to help inform local governments on where they should create marine sanctuaries. It’s a big ocean and only so much of it can be actively protected. Thus, having data to prove certain areas like sea grass beds yield a lot of tiger sharks is valuable information.

How You can Help

If you are a believer in shark conservation and shark science you can donate to Beneath The Waves.

I can tell you first hand that these guys are shark lovers first and foremost. They genuinely care about the animals that they are harvesting data from. So, know that the research is worthwhile, but also that the animals are being looked after. That is important! 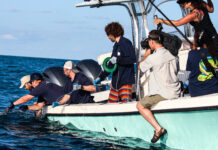 On Now: Sharks Of The Bermuda Triangle 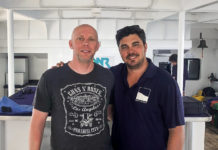 Austin Gallagher: The Pope Of Awesome-Town 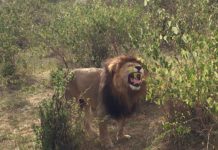