You are a zebra.

Your name is Franco.

You are out there in the wild doing your zebra thing living that good-good life:  eating grass, taking steaming nutrient rich dumps, and maybe, if it is a really good day, you get your bump-n-grind on with one or several other receptive zebras (or other species depending on what the day’s options are like – no judgement, ya filthy bugger).  Now this is living!

You have thought about what a bad day might look like:  the grass dries up, your dumps are dry and lack nutrients, and your regular ports in the storm are not available.  But a really bad day…a really bad day would feature having your liver eaten.  You hope that for the rest of your long-legged stripped life no ever shows up to eat your liver and ruin your day in the process.  Hey, it’s a fair and equitable dream, right?

Franco here had a really bad day a couple of weeks back.  Lions, known rapscallions of the high-plains grasslands, showed up to ruin Franco’s day.  This message was delivered to Franco by the rapscallious lions, “Franco, old chum, we are sorry to interrupt your bountiful steaming nutrient-rich dumps.  We fear that our intent towards you will likely ruin your day.  For, you see, we have come to eat your liver.  So sorry for any inconvenience.”  Then, the lions did a very lion-like thing to Franco – they tried to kill poor Franco with the intent of eating his liver.

How Franco escaped a grand old liver-eating party with him as the guest of honor is not something that I, your handsome narrator, know.  I imagine the exchange between Franco and the lions went something like this: “No,” said Franco. “Despite your best efforts I think I shall keep my liver.  How about we take the grim mutilation that I have suffered thanks to your efforts, keep my liver, and we call it even?”  Maybe Franco threw a couple kicks to the nuts of those lions and escaped.  Regardless, Franco still had his liver and was satisfied with the outcome, all horrible things considered.

And there Franco was when I stumbled upon on him, scarred, but appreciative of his liver. Yet Franco was still having a rough time of it.  Despite the extensive scarring some freshness in the wounds remained.  Why were there still fresh wounds on poor Franco despite the obviously scarring?

I went on my way leaving Franco to likely get devoured by lions or a tyrannosaur or Hannibal Lechter.  Surely an animal that mangled with never survive despite their perspective on their situation.  Right?

I like to think that Franco taught me some perspective about life on that day that I had tea with him.  First, hey, things might seem bad, and you’ve been horrifically mutilated, but you still have your liver, right?  Second, sure, a really bad day involves the drifter that I made uncomfortable eye-contact with at the bus stop making a move to eat my liver while merely mutilating me in the process.  I like to take solace that in my recovery from the mutilation I can be reasonably assured that some a-hole bird won’t show up to pick at my wounds.  Always look at the bright side of life, folks. 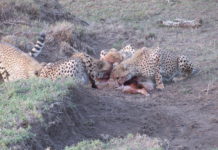