Yeah, I have eaten larvae before.  So what!

One of the coolest things about traveling to wild places to see exotic animals is that you get to meet wild and exotic people.  At some point, someone is going to serve you a food item that you don’t necessarily want to eat.  That food item could be gross or profane or human flesh or something worse, like beetle larvae.  Here is how to handle that situation in a way that will make you look like a AAA+ rated bad-ass kung-fu super-star.

Once upon I time I was getting weird with some animals in the Amazon.  This particular getting-weird event had a guide that would do the talking about the animals, a spotter that would keep a look out for the animals, and a crew of adventuring Danes.  After a week of being out in the jungle the spotter told myself and the Danes that he wanted to have us over for dinner.  Apparently, that was a rare honor, the guide assured us.  Hey, man, when was the last time a Kichwa native offered you some vittles at his swag-pad?  When that offer is made you have to accept.

The spotter’s house had two bedrooms, one for the kids and one for he and his wife.  There was a standalone kitchen in a separate smaller room attached to the house via a plank.  Like, walk the plank-plank.

In the kitchen there was the Mrs. and granny cooking up dinner:  plantains and fat palm beetle larvae!

The spotter and the guide gazed hungrily at the simmering larvae.  The guide noted that he really missed home-cooked food like this.  He nodded to we adventurers and assured us that we were in for a treat.

Westerners just don’t have a lot of beetle larvae in their diets.  The prospect of eating beetle larvae is not super-enticing even to the fattest, hungriest, and most willing to try new things, which I am.  At this point you start to realize that you are about to be offered beetle larvae to eat with the expectation that you actually do so.

Once the chef determines that the beetle larvae are grilled to perfection the meal is served.

My fellow dinners were confronted with a grim dilemma:  should they eat the beetle-mania vittles or risk offending our hosts by foregoing?  Their hesitation got me thinking that maybe this was all a joke.  Like, the Kichwa serve up these beetle larvae to outsiders just to see if they would eat them and the rest of the time they eat McNuggets.  I was 90% sure that this was their usual food and 10% suspicious that this was a joke.

While I enjoyed the Danes himming and hawing as to if they should proceed my own moment of truth came.

I picked up my spoon, glanced at the room, and it was all-eyes-on-me. It was time to answer the social awkwardness bell so I dug in!

My intention was to minimally chew the thing and basically swallow it whole.  Problem:  it was huge.  This was going to require chewing that would likely trigger me vomiting.  Good thing that everyone was still watching me so no pressure!

My thoughts on chewing a massive beetle larvae:  the body is chewable with a texture that only makes you half want to projectile vomit.  The head…chewing the head is when you are acutely aware that you are chewing a larvae.  It was like chewing up soft plastic, but, ya know, it’s not.  It’s not at all.

At this point I could feel the gag relax starting to trigger.  I grabbed my handy water bottle and flushed the disgusting bastard down my throat as quickly as possible.  I had now eaten a beetle larvae without spewing all over this family’s jungle swag-pad!

My gaze immediately turned to the Danes who were looking at me with a mix of horror on their faces as well as what looked like their own gag reflexes kicking in.  The Danes could tell what my return gaze meant, “your turn, suckers!”  What did they do?  They chickened the hell out!

Next, I did what any other fatty-cakes would do – I stared everyone down as I ate every single larvae that I was served.  All of them.  The heads and all.  At one point the guide, who was now greedily eating that good-good home-cooking, looked over at me with a look that indicated that he now thought that I was a AAA+ rated bad-ass kung-fu super-star and said, “Wow, you really like this food!  I never expected an American to eat all of that.”  First, you tipped your hand that you were hoping that I wouldn’t eat my food so you could have it, which is a fat-move that I invented.  Second, Americans are universally fat.  Of course I was going to eat all of it.

The guide and the spotter ended up finishing the food that the dejected Danes wouldn’t eat.  Once all of the larvae were gone it was time to celebrate.  The spotter broke out his “energy drink”!

I have no idea what was in the “energy drink”.  It was a murky liquid with bits floating in it and there may or may not have been a monkey’s paw in there (there wasn’t).  What I do know is that it was the strongest liquor that I have ever tasted.  I was positive that the “energy drink” was so strong that it would kill any internal parasites that I picked up during the meal.  I was wrong.  That is a story for another blog.

And that, gentle readers, is how you make friends and influence people by eating beetle larvae.  Let me know how it works for you when you try it. 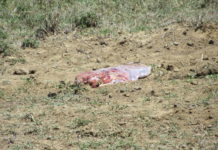 Wildebeest Placenta: Everything That You Always Wanted To Know, But Were Afraid To Ask